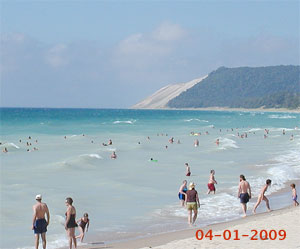 And lo shall the roof and the floor of the world change places
Shall the warm become cold, and the cold warm, and the unseasonably mild, seasonable
and the seasons be confused like Old Man Withers on Saturday night


Thus begins a little known prophecy that researchers say explains today’s dramatic weather shift. The mercury hit 86 degrees by 8 AM this morning and has done wonders for the spirits of folks who weren’t able to take a vacation for Spring Break. According to a statement from Dr. Angus Johausen of the Better Put on a Sweater Institute in Empire:

“With the aid of climatologists, we have been tracking the so called “April Prophecy” for quite some time,” Dr. Johausen explained. “We have hoped that it was perhaps just the musings of a deranged mind, perhaps Old Man Withers himself, but it appears that the manuscript that was unearthed by Park Service officials in the late 1970s is in fact proving true.”

While the polar switch is having dramatic consequences from Coral Beach to Cancun, the estimated 37 people who are left in Leelanau County during the annual Spring Break exodus gathered early today for a swim at Empire.

We caught up with Empire area businessman Tim Young who said “I’m of course worried about how this climate shift will affect our growing season this year, but it’s hard to be too concerned when you’re swimming in Empire in April!”

The two Leelanau residents in this photo shown on the beach in St. Petersburg asked to remain anonymous because they really hadn’t spent as much time working out and tanning before Spring Break as they wanted to.

Unfortunately, the polar switch is only expected to last through the day.