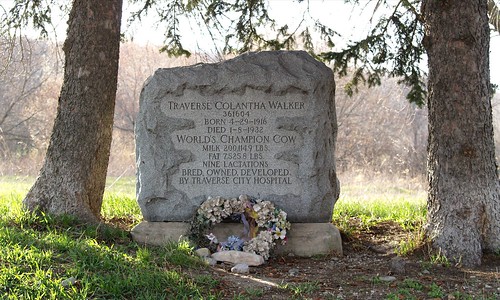 From World Champion Cow of the Insane at Roadside America:

Northern Michigan Asylum opened in 1885 and gradually became a sprawling complex on the western outskirts of Traverse City. It was so vast that it had orchards of cherries, peaches and apples, vineyards and vegetable gardens, field crops, and livestock from beef to chickens, horses to pigs. And it had its own herd of cows.

The most famous of these — the most famous inhabitant, period, of the entire Asylum — was Traverse Colantha Walker. She was a grand champion milk cow, producing 200,114 pounds of milk and 7,525 pounds of butterfat in her long life. When she died in 1932 the hospital staff and patients held a banquet in her honor. They buried her in a small, grassy knoll, under a marble tombstone, outside of the stately brick dairy barn that had been her home.

Photo Friday: Moon over Lake Leelanau by Missy Luyk "One" Music Live at the Northport Pavilion
Scroll to top