IMPORTANT SAFETY UPDATE! The Leelanau County Sheriff’s Department has declared the ice caves on Lake Michigan unsafe!! The winds have moved the ice and there is now open water within feet of the caves, and the strong winds expected today and tomorrow will continue to push water and ice inland. There are also large cracks in the arches and they are expected to start collapsing soon.

mLive called out this incredible video by Tom Auch and George Meredith of the massive ice caves off the western shore of Leelanau County.

Getting to the formations is no easy task, he (Meredith) warned. Observers need to be careful about jagged terrain and ice alterations that could be dangerous. He suggested that some type of walking cleats are needed.

Since news stations began reporting on the ice formations a couple of days ago, large numbers of people have come to see them.

“This is a once-in-a-decade natural beauty,” Meredith said. “Some of the caves literally have loft formations in them.”

They are located off Gills Pier about 7 miles north of Leelanau and the article includes a map. I feel compelled to add that Lake Michigan is deep, cold and dangerous so please use some common sense and buddy up! 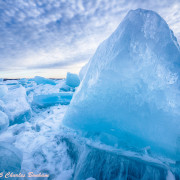 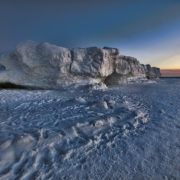 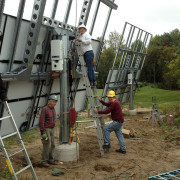 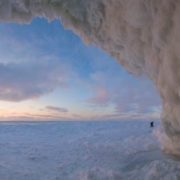 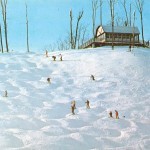