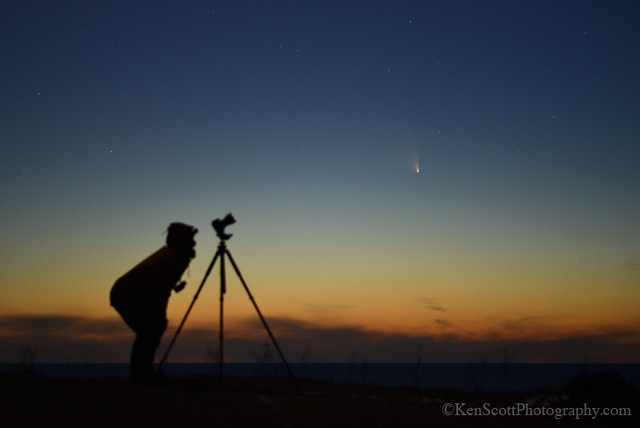 EarthSky.org is a fantastic site for all things astronomical, and their post detailing everything you need to know about Comet PANSTARRS has great info on the first of 2013 major comets. The comet was discovered by the PANSTARRS telescope in Hawaii and they explain that:

Comet PANSTARRS is still visible through binoculars in the Northern Hemisphere, if you know right where to look. Note where the sun sets in the west. Some 60 to 75 minutes after sundown, seek for the comet about two to three binocular fields to the right, or upper right, of the sunset point on the horizon. Comet PANSTARRS now sets at nightfall or very early evening at mid-northern latitudes. From here on out, the comet will dim a bit day by day, while the waxing moon will brighten daily. So it’s hard to say how much longer Comet PANSTARRS will be readily visible through binoculars. Each day, Comet PANSTARRS goes a few degrees northward (to the right) on the sky’s dome, toward the constellation Cassiopeia the Queen.

…No matter how bright it gets in March, the comet will surely fade as April arrives, as it moves away from the sun and back out into the depths of space. But it will be located far to the north on the sky’s dome and will be circumpolar for northerly latitudes in the Northern Hemisphere. That means it might be visible somewhere in the northern sky throughout the night for northern observers. What’s more, the comet will be near in the sky to another beautiful and fuzzy object in our night sky, the Andromeda Galaxy (M31), the nearest large spiral galaxy to our Milky Way. If the comet truly is bright then, and if it still has a substantial tail, it’ll be an awesome photo opportunity!

Read on for more and also check out the michpics post on Comet ISON which has the possibility of  being so bright that you can see it in the daytime!

Ken shot this last weekend. You can see it on black, check out the sunset he captured before this and see more great work in his Night Sky slideshow. If you’re looking to purchase this or other shots, definitely head over to KenScottPhotography.com!