Irises are in bloom all over Leelanau, so we thought it was a great time to dust of this feature on the Centennial Iris Farm on M-72 by Cherie Spaulding! 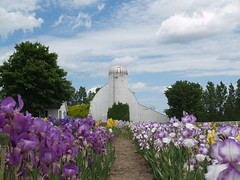 Heading west toward Empire in mid-June, it is easy to see how the iris flower was named for the Greek goddesss of rainbows; and it would be no mystery to imagine what possessed Vincent van Gogh to lug his easel into the field, in his attempt to capture this exotic flower’s beauty. Atop undulating hills busied by a bold palette of blooms, the Iris Farm on M-72 adds color and life to Leelanau’s rich agrarian landscape.

In the midst of bloom, the sea of iris rarely goes unnoticed, but the land itself may be overlooked. This sandy, gravel soil upon which William Black’s family settled has survived decades of growing. Seventeen years ago, this fifth generation Leelanau farmer decided to no longer fight against the elements, and instead choose to embrace the offerings of his land. The family noticed that the iris plants blooming around the farm thrived…and an idea began to grow.

The iris flower appeared well suited for Black’s land. The family decided to convert their fruit land to flowers. Over the nearly two decades since, the farm has become home to over 700 different iris and 300 day lily varieties–plants that thrive in sandy soil conditions. Of course, the flowers attract more than bees, and a wide-range of visitors tromp the fields regularly. The farm caters to several distinct groups, including, gardeners searching for specialized blooms, painters and photographers; customers seeking cut flowers and even tour bus groups. Visitors are able to see a stunning array of showy flowers in a wide spectrum of colors; all can observe iris blooms to purchase and plant in their gardens at home. 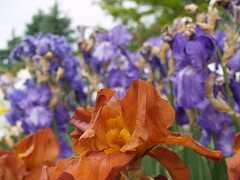 While it is true that in peak season, the Iris Farm stands as a sort of feast for the eyes–a delicious rainbow of petals, meandering along the hillside–long after the colors fade ideas continue to blossom. To find such an abundance of plant varietals, the family spends some of the winter months traveling the country, attending conventions and seeking new hybrids for their unusual colors and qualities. The Farm acquires breeds from destinations as far off as Australia. One highlight of their farm this season is the 24 varieties of black irises, sought for both their elusive beauty, velvety touch and rich fragrance. The iris hybrid varieties extend into the thousands; Black said that determining a favorite is not an easy decision. “I feel like a kid in a candy store,” he admitted.

When I asked Mr. Black what aspect of iris farming he enjoyed the most, he shared that part of the benefit to living in Leelanau County is the richness and beauty of the outdoors. Though growing flowers can be labor intensive, working in the fresh air, under an open sky, is one of the perks. And personally, I think “being outdoors” is a job benefit one cannot easily quantify.

The irises will be in bloom by mid-June and the lily season continues in mid-July. Do not miss the chance to explore the farm for yourself. The Iris Farm is located at 5385 E Traverse Hwy, Traverse City, MI 49684. The phone contact is 231-947-9040.

Photoa: “Iris Farm (check it out bigger!) and Mr. Sun by Andrew McFarlane