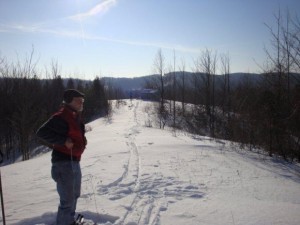 In Community Wind Faces Roadblocks, IPR News Radio explains that the village of Northport owns the hill behind its new sewage treatment plant, and a planned wind turbine about half the size of the windmill outside Traverse City will supply half the electricity for the plant.

Tom Gallery and more than a dozen other investors formed a private company and put up their own money to finance the turbine,allowing them to use federal tax credits and incentives that would not be available to the village of Northport.

Despite the benefits of local owners generating clean energy and using it on site, community wind projects are rare in Michigan. And Steve Smiley says it’s because the state makes them difficult to do. “Every time we turn a corner someone’s putting up a wall in front of us.”

Smiley is the project manager for Leelanau Energy. He says, under state rules, there’s an incentive to keep these projects smaller by paying less for the electricity as the projects get bigger. Originally, the Northport turbine was designed to supply all the electricity at the sewage plant. But at the lower rate, the numbers didn’t make sense.

And Smiley says if state rules required a fair price for all community wind it be a lot easier to do. “We wouldn’t have to go through tons and tons of paperwork and complications and have twenty or thirty people involved for a year just to try to do a piddly little project.”

Read on for the rest of this interesting piece – what do you think?

Photo of the Week: Cotton Candy Day
Scroll to top