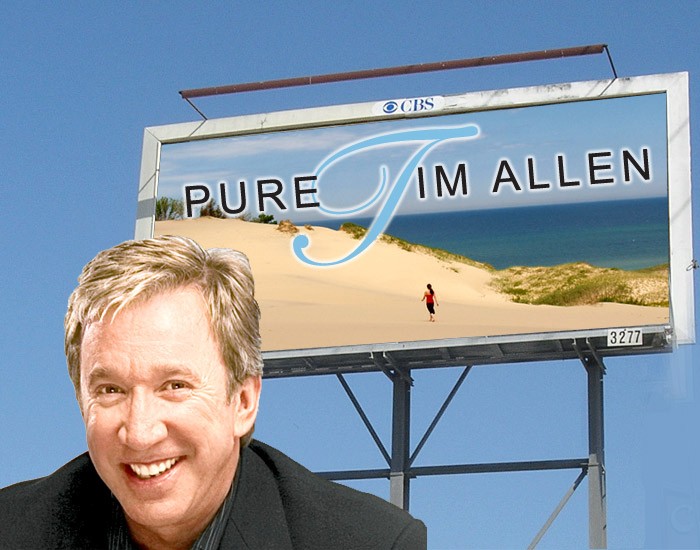 VIA ABSOLUTE MICHIGAN | APRIL 1, 2010 In a shocking move, longtime Leelanau summer resident and Pure Michigan spokesman Tim Allen has announced both his takeover of the popular Pure Michigan ad campaign and his candidacy for Michigan Governor.

Michigan Democratic Party Chairman Mark Brewer explained how this all came about in a 9 AM press conference unveiling “Pure Tim Allen” on the morning of April 1st:

“With John Cherry’s abrupt withdrawal, we had been looking at a ticket of Geoffrey Fieger and Sparty. We felt pretty good about our chances, but a Zogby-Harris pollster came to us with the results of a poll showing that 32% of the residents of Michigan thought that Tim Allen already was the Governor through his work on Pure Michigan. From Home Improvement, Toy Story and of course his many voice-overs, we knew that Tim had piles and piles of money. With Pure Michigan struggling for funding, the whole thing was a natural fit.”

Brewer continued “Quick phone calls over to Allen’s people and Travel Michigan Vice President George Zimmerman showed all parties in favor of the move. While we felt good about our chances, adding a name (and voice) like Tim Allen definitely increases our chances in 2010.”

Zimmerman was equally exuberant about the scheme and revealed that Travel Michigan is already hard at work on a new line of commercials declaring “Balancing the budget begins at Michigan.org.” Even Michigan Republicans reluctantly supported the move, with current front-runner Mike Cox declaring “While we’re obviously saddened that Allen will be running against one of the 732 Republican candidates, those commercials just make you feel so darn good!”

Watch Michigan State at the State!