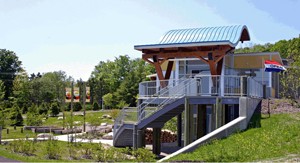 The autumn weather in Northern Michigan has turned out to be as inspiring as we had all dreamed, after a summer of intermittent skies and fair weather. On one of those particularly fine days, I convinced myself it was time to check out the Eyaawing Museum and Cultural Center, in Peshawbestown, which is on my way to Northport, a frequented destination for hiking.

Oriented in the spirit of the four directions, the entrance faces the water to the East, the rise of the sun. The roof ripples like a wave, representing the tribes intimate connection and dependence of water. Overlooking Sutton’s Bay, on a clear autumn day the abundance spills from a cornucopia: deep blue bay, bright leaves, a jutting peninsula. Inside, one exhibit displays a behemoth birch bark canoe. Among other offerings–ornate black ash baskets, quilts, tools, and photographs depicting early historical snapshots of native life in the region.

One of the most spectacular offerings of the museum could easily be overlooked by mild case of myopia or neck strain. Another visitor mentioned the two flying eagles hanging from the apex of the cathedral ceiling. Caught in flight, the eagles were engaged in a mating ritual called “cartwheeling.” In this act, the pair lock talons and then tumble–free-falling–from the sky. This entwined pair’s flight was fatally interrupted when their descending bodies collided with a live electrical wire. After the bodies were discovered, they were donated to the museum where they were suspended indefinitely in their last act.

Eyaawing, in the native Anishinaabemowin, translates to mean “who we are,” and as much as the tribe is offering to share a bit of their identity with those passing by, I sense that they are looking into their past to gain direction on where to orient themselves for the future. Whether you enjoy learning about the past or want to gain insight on the present of the local native peoples, Eyaawing offers rich architecture, a collection of artifacts, and both historical and modern day perspectives of native life. Check it out!

Leelanau Almanac for the Week of September 17 – 23 Photo Friday: So give me something to do already! by Pentax K1000 Gal
Scroll to top