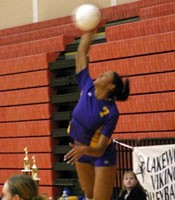 The TC record-Eagle reports that Leland senior Alisha Glass was honored as the Michigan Female Athlete of the Year by the Detroit Athletic Club in a ceremony Monday night. The award is designed to honor both athletic performance and scholarship and has been won by such athletes as Shane Battier and Drew Henson.

Glass helped to lead Leland to the 2006 state volleyball title. She will attend (and play for) Penn State, was previously named Gatorade’s volleyball Player of the Year in Michigan and Michigan’s Miss Volleyball.
Read Glass is Female Athlete of the Year in the Record-Eagle

TC Teacher Developing Skateboard Curriculum The Leelanau Almanac for the week of May 11 – May 17, 2006
Scroll to top