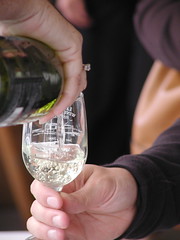 Both MichWine.com and wine writer Sandra Silfven of the Detroit News are reporting on news that the new Forty-Five North winery owned by Indiana ophthalmologist Steven P. Grossnickle has hired accomplished Leelanau winemaker Shawn Walters, who has served as the winemaker for Leelanau Wine Cellars. Silfven writes:

“I’m the luckiest dude in the world,” the 60-year-old Grossnickle said in a recent interview. He glowed about Walters’ accomplishments, which include his sideline job making wine for the new Longview Winery in Cedar, and landing them a bunch of medals last year.

“Opportunity is what it took for Shawn,” said local vineyard manager Doug Matthies, supervisor of Forty-Five North’s vineyard plantings. “Here he can concentrate on being a world-class winemaker. He has the opportunity to make $30 – $40 – $50 bottles and get on the world market with them.”

Matthies told MichWine that the new facility is state-of-the-art, with the ability to do a full gravity flow operation and the capacity to make 30,000 cases of wine per year, although the initital goal is closer to 10,000.

Leelanau Almanac for the Week of May 17-23, 2007 Busier times on South Manitou Island
Scroll to top