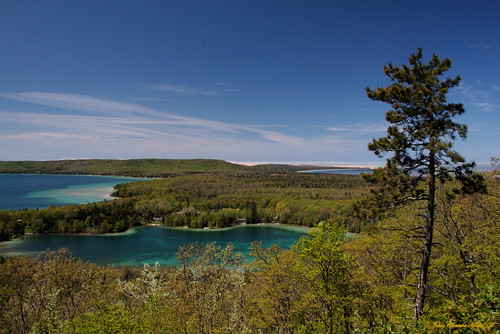 John took this photo yesterday from one of Leelanau County’s most amazing places, the Miller Hill Lookout. The Sleeping Bear Dunes National Lakeshore’s Geology Tour page has this to say about Miller Hill:

From the high vantage point of Miller Hill, you can see the continuing pattern of bluffs and bays. Sleeping Bear Bay gives a strong impression of the lobate shape of the ice that created it. If you had stood here 11,000 years ago, you would have seen the waves of ancestral Lake Michigan lapping up at the base of Miller Hill. The lowland between here and Lake Michigan is a sand bar consisting of a series of low ridges and troughs parallel to the shoreline, formed as ancestral Lake Michigan receded. The Crystal River, hidden in the woods below, flows along the troughs making many hairpin turns at low points as it seeks a path to Lake Michigan.

From Miller Hill you can also see Sleeping Bear Point at the western end of Sleeping Bear Bay. In 1914 and again in 1971, landslides occurred at Sleeping Bear Point. Each time about 20 acres of land slid into Lake Michigan. A smaller slump occurred in early 1995. Because of geologic conditions, it is likely that landslides will occur again in the future. Shoreline currents and wind carry sand to the Point where it accumulates until it becomes unstable. The sloping bottom of Sleeping Bear Bay can tolerate only a limited amount of accumulation. When too much sand builds up, storms or saturation with melting snow can trigger a landslide.