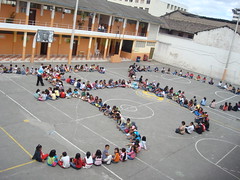 On Saturday September 26th at 3:00 p.m. a group photo will be taken at the Sleeping Bear Dunes National Lakeshore Dune Climb in support of the international 350.org campaign to stop the global climate change crisis. The number 350 is the amount of carbon – in parts per million – that the world’s leading climatologists have determined to be the maximum to sustain a climate that will support life on earth. Everyone is invited to participate in this photograph by standing on the dunes in the shape of a “3-5-0”.

Saturday’s gathering at the Sleeping Bear Dunes is a precursor to a massive worldwide action on October 24, 2009, the International Day of Climate Action. On this historic day, literally thousands of communities from more than a hundred countries will unite in what will likely be the largest international environmental action in history. The idea is to register the 350 goal with world leaders as they prepare to meet this December in Copenhagen, Denmark to reach a new global climate treaty.

People interested in participating in the September 26th photograph at the dunes should arrive at 3:00 p.m. at the Dune Climb parking lot on M-109 north of Empire. Participants are asked to wear bright clothes; greens and blues are preferred. Sleeping Bear Dunes National Lakeshore is supporting this event by issuing a Special Use Permit and participants are invited to help with the Lakeshore’s annual beach cleanup as a part of National Public Lands Day, also on the 26th. Volunteers for the beach cleanup will meet at the Visitor Center at 12:00 p.m., and will conclude their work by 3:00 p.m. to allow them to participate in the photograph.

In northern Michigan, Traverse City is the place to be on October 24. A huge public gathering is planned at 1:00 p.m. at the Open Space, featuring a large group photograph followed by an indoor rally at the Traverse City Opera House. The September 26th photo at the world’s largest freshwater sand dunes is designed to get people involved in the 350 movement and build momentum for the bid day on October 24th. Photographs from both events will be disseminated internationally through the 350.org Web site as a statement of support from northwest Michigan to make 350 the global target for carbon. More information is available at www.TC350.org.

The 350 movement’s lead organizer Bill McKibben had the idea for a dunes photograph when he visited Traverse City in October of 2008. McKibben spent two days in the region, and spoke to more than 700 people at Lars Hockstead Auditorium. As part of his visit, he hiked the Sleeping Bear Sand Dunes, and was struck by the beauty and global significance of that place. He then requested a photograph of people standing in the shape of 350 to help raise awareness about the global climate movement. McKibben’s visit sparked tremendous excitement within the Traverse City region, mobilizing the TC-350 citizens movement.