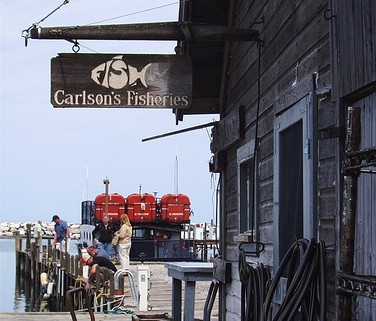 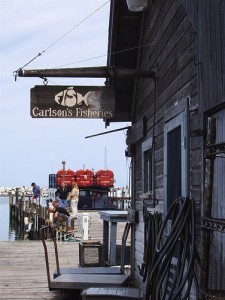 The TC Ticker reports that a fifth-generation of the Carlson family has purchased Fishtown’s anchor business, Carlson’s Fisheries.

Sources tell The Ticker that Bill Carlson, who has operated the historic fishery in Fishtown since the late 1960s, and his wife, Jennifer, have sold Fishtown’s flagship – Carlson’s fishery – to Bill’s nephew, Nels Carlson, and his business partner Joe Campo.

The new enterprise will continue to operate out of the iconic fishery shanty. The terms of the transaction were not disclosed.

“Fishtown has had continual commercial fishing activity since the second half of the 19th century… and the Carlsons have been an ongoing part of this history in Leland since 1905, when they built a shanty on the north side of the river,” says Amanda Holmes, executive director of the Fishtown Preservation Society (FPS), a nonprofit organization which took over ownership of the historic fishing village in 2006 to preserve its heritage.

Holmes says the sale sets an “optimistic tone” for the future. “We do not want to think about what it would mean if this sale had not gone through, except to say that those who have been involved in Fishtown over the years have had to adjust and adapt – and Fishtown has survived,” Holmes says.

Read on at the Ticker for more including a photo of the Carlsons at the purchase. Photo credit: carlson’s fisheres by oldbrushes.

Here’s a short video of the crew at Carlson’s cleaning a mess of whitefish (fish guts warning!) that includes Bill Carlson and (I’m pretty sure) Nels as the first guy on the left.

Aerial Photography of the Leelanau Peninsula