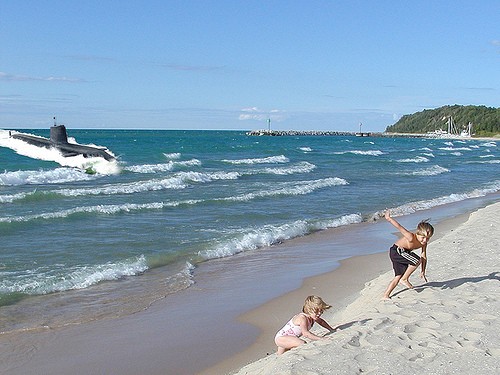 GRAND MARAIS, MICHIGAN – At a meeting of the Michigan Society of Speculative Science (MiSSS), Dr. Werner Unterseeboot of the Institute for Great Lakes Submarine Research announced that his advanced photographic analysis has confirmed the validity of the famous “Windy Beach Photo”.

The photo was taken by an unidentified vacationer in the late summer of 2003 in the sleepy village of Leland on Lake Michigan and has been the subject of nearly unending controversy in scientific circles since it came the attention of the scientific community last year.

Appearing fiercely triumphant as he read from a prepared statement, Dr. Unterseeboot (himself the subject of much ridicule) declared “With this photo, my years of research are validated. Without question, we can say what everyone with eyes in their head has known all along: there is an active submarine presence in the Great Lakes. While I am not ready at this time to say who might be operating these vessels, it can no longer be questioned that they are in the Lakes”.

The 87-year-old maverick researcher refused an interview, but an employee of the Institute speaking on conditions of anonymity related that the Institute has “literally thousands of photos of submarines from all over the Great Lakes” that will be released as they are validated to a special web site set up by the IGLSR.