As Leelanau continues to dig out from a MAJOR winter storm, we thought we would post some of the highlights (or is that low points) of this very disruptive storm. TV 9&10 meteorologist Tom O’Hare explains:

The storm developed very fast and right over Michigan. It was just the right combination of cold air, Gulf of Mexico moisture and atmospheric conditions to produce some incredible totals. The first wave was incredibly moist and powerful. Thundersnow was reported across much of the Lower Peninsula (heard it!). Under these t-storms snow was falling a rate of 2-3″ per hour. The storm started around 6pm for many and by midnight, reports of more than 1 foot were coming in along with impassable roads.

The second wave of snow didn’t have as much moisture content, but it was still very high. Being so wet it very hard to get rid off. Snow blowers were getting stuffed with the wet snow and all those who were out shoveling are still hurting.

Development of the storm was key to where the heavy snow came down. The heaviest was just NW of the storm’s center from Manistee to Rogers City, covering most of our Northern Lower Counties as well as the far Eastern Upper Peninsula. Storm totals reached up to 20″ in parts of Grand Traverse, Leelanau and Benzie counties. This general area had 14-20″. The first part of the storm was very wet and that coupled with freezing temperatures made it stick to everything. So when it accumulated it didn’t fall off the trees/power lines very quickly, it just made things heavier. The good news is the strongest winds ended up being downstate with gusts of more than 50 mph. If they were that bad here, you would’ve seen more power outages. 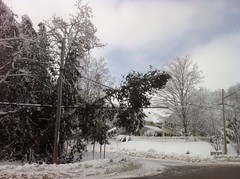 Snow fell steadily through the night and all phone service went down in Leelanau County, even cell phone coverage. Benzie County closed roads and by Sunday morning, Leelanau, Benzie and Grand Traverse were under a state of emergency, and all schools in the area were closed on Monday with Leland, Glen Lake and Northport closed again today.

The biggest effect of all that heavy snow was to drop a bunch of trees. As the photo to the right shows, many dropped onto power lines, and nearly 350 utility crews were brought into the area to help bring power back up. An estimated 250,000 people statewide lost power, with 35,000 in our area still without power on Monday. TV 7&4’s outage update this morning shows 3000 people in Leelanau still without power!

They also talked with Heather & Bailey Sutter of Suttons Bay as they visited one of the America Red Cross temporary emergency shelters that were set up.

You can also see a Snow Day slideshow with some of the damage and a walk along the Lake Michigan shore from Sunday.

Photos: Vineyard View … after blizzard, panorama by Ken Scott and Houston, we have a problem by farlane

Leelanau Backgrounds: Daffodils in the Dark
Scroll to top