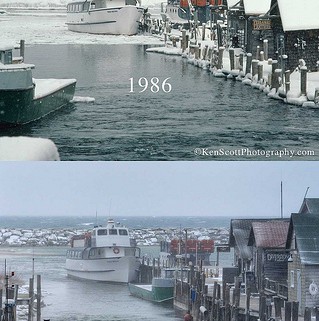 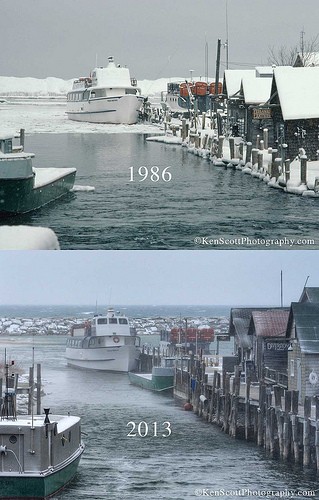 Chicago Tonight had an in-depth feature (with video) on the lowest Great Lakes water levels in recorded history that features Leland and Leelanau County that begins:

2012 was the warmest year on record according to NOAA, the nation’s climate monitoring service. The Midwest was also in the grip of a severe drought. Those two factors have led to the lowest water levels in history for Lake Michigan and Lake Huron, which is considered one body of water hydrologically. The impact of the low lake levels on those who live on the Great Lakes is heavy.

Leland Harbor is the heart of a northern Michigan town. The small town is quiet in the winter, but the population jumps ten-fold in the summer when tourists flock to the harbor, beaches and quaint shops. That tourist economy is now in jeopardy because of the dramatic drop in Lake Michigan’s water level.

Harbor master Russel Dzuba said the lake is down more than two feet from its average, and that drop is threatening to close the harbor.

“The economic impact this harbor has on the community is strong. And when things are slow, the guy at the grocery store, the guy at the restaurant comes down and asks me what’s going on. They want to know,” said Dzuba. “So, it’s an economic punch that we hate to think what happens if we cant keep that channel open.”

Photo Credit: “… is the Lake Michigan water level low?” by Ken Scott was perfect for this feature!