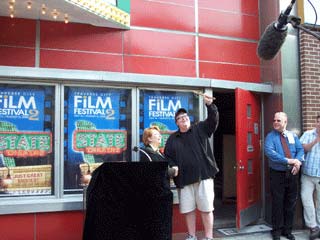 The Traverse City Film Festival announced this morning that it would accept the deed to the historic Traverse City theater Rotary Charities of Traverse City. The nonprofit initially plans to have the theater open on weekends in the winter and seven days a week in the summer. Festival co-founder Michael Moore said:

“It has been our dream since we started the festival two years ago to bring the State Theatre back to life and restore it to its glory as one of the great movie palaces of the Midwest. Now, thanks to the generosity of Rotary Charities, people from all over northern Michigan will be able to see great films the way they were intended to be seen: projected on a big screen with great sound in an atmosphere where going to the movies can be an exhilarating experience.”

You can read the complete news release at the festival web site, read Film Festival to Take Over in the TC Record-Eagle, and learn more about the Traverse City Film Festival which will be held July 31 – August 5, 2007 at traversecityfilmfest.org.

Photo credit: Michael Moore with the key to the State Theatre by Jennifer Hutchinson

Busier times on South Manitou Island Leelanau Almanac for the Week of May 24-30, 2007
Scroll to top