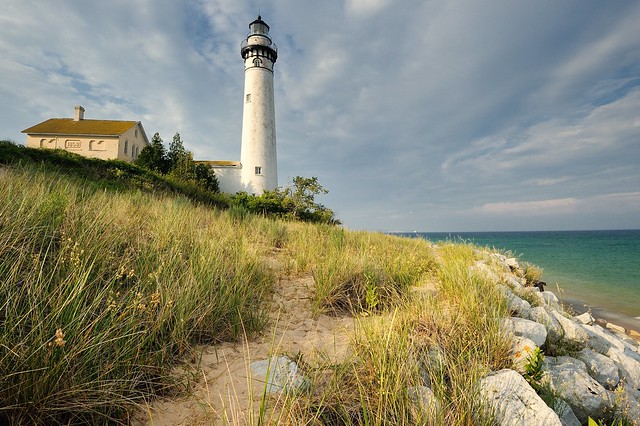 Located just off the mainland coast of Lake Michigan’s east coast, a group of islands known as the Beaver Archipelago form a chain which marked the western edge of a tight passage along the coast. Known as the “Manitou Passage,” vessel masters taking this narrow passage were able to reduce the travel distance between the ports of Lake Michigan’s southern shore and the Straits of Mackinac by sixty miles, as opposed to taking the more circuitous route through open water to the west of the islands. As the most southerly of this chain of islands, South Manitou also featured one of the areas safest natural harbors, and with 5,260-acres of fine timber growth covering the island, it is not surprising that a few enterprising settlers arrived during the mid 1830’s to sell firewood to steamers taking shelter in the harbor when things turned sour out in the lake. By the late 1830’s it was commonplace to find upward of fifty vessels crowded into the harbor seeking refuge and taking-on supplies when things turned sour out in the lake.

Lying a scant few miles west of Sleeping Bear Point, mariners were hard pressed to locate the southern entrance to the busy passage at night or in times of thick weather, and a cry arose throughout the maritime community to light the southern entrance to the passage. Taking up their call on February 19, 1838, Michigan State Representative Isaac Crary entered a motion before the House of Representatives to erect a lighthouse on South Manitou, and fully cognizant of the vital role played by maritime commerce in the area, Congress responded quickly with an appropriation of $5,000 for the station’s construction on July 7 of that same year.

Read on for much more from the lackadaisical first keeper, William Burton to the 1857 reconstruction of the light with Cream City brick. Much more on South Manitou Light from the National Lakeshore.

The Milky Way over Leelanau
Scroll to top