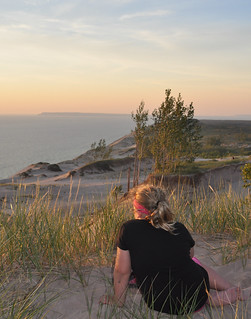 Sometime this month, the 1,364,835th visitor to the Sleeping Bear Dunes National Lakeshore in 2012 will arrive at the Dune Climb, hike to Pyramid Point, or perhaps bike the Heritage Trail and enjoy its stunning autumnal beauty. In doing so, that visitor will officially make this the busiest year ever for the Glen Arbor region, the most profitable for local businesses, and perhaps the most hectic one too.

…as of Sept. 1, visitors to the National Lakeshore were up 21.7 percent over the same eight-month period in 2011, putting the Park just 66,764 visitors shy of the annual record, which was set in 1999. “It’s extremely likely we’ll exceed our record by the end of September,” deputy superintendent of Sleeping Bear Dunes National Lakeshore Tom Ulrich told the Leelanau Enterprise. “Even if we were to have our lowest September attendance ever (70,000 in 2003), we’d still have a new record.”

But record profits weren’t the only change in the north country. Some business owners noticed distinct types of tourists to which they were not accustomed, and not always attracted — visitors who were driven to come here perhaps by the successful Pure Michigan campaign, or more likely by the Good Morning America honor, and the northern Michigan social media campaign that secured that victory.

“My concern is that at least some of them were expecting something different from Glen Arbor than what we actually offer,” said Widmayer. “Some people who came probably got a signal from Good Morning America that this place was really beautiful but they didn’t take their expectations into account. We describe Glen Arbor as a flip-flop-wearing, beach town, whereas they were looking for something more upscale, where they only have to wander short distances.”

Read on for much more about the impact on and observations by local businesses and also share your comments over at the Sun or on our Facebook!