Waterspout Weather via Michigan in Pictures… 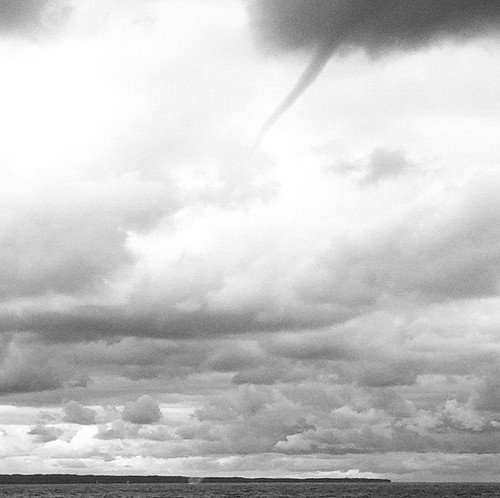 I don’t usually blog my own photos to Michigan in Pictures, but yesterday afternoon I had the good fortune to see a waterspout above the Manitou Passage in the Sleeping Bear Dunes National Lakeshore. If you look closely, you can see the turbulence on the water in front of South Manitou Island towards the center. There’s some more shots in my You Can’t Change the Weather slideshow. I also captured three waterspouts over North Manitou Island in September of 2008.

Meteorologist and Science and Operations Officer Bruce B. Smith of the National Weather Service in Gaylord writes the following about Waterspouts:

Persons living in northern Michigan are well aware that the Great Lakes have a profound impact on local weather patterns. Examples include heavy lake effect snows in winter, and cooling lake breezes in summer. As the end of the summer season approaches, another type of unique Great Lakes weather phenomena is possible — the waterspout.

Dr. Joseph Golden, a distinguished waterspout authority with the National Oceanic and Atmospheric Administration (NOAA), defines the waterspout as a “funnel which contains an intense vortex, sometimes destructive, of small horizontal extent and which occurs over a body of water.” The belief that a waterspout is nothing more than a tornado over water is only partially true. The fact is, depending on how they form, waterspouts come in two types: tornadic and fair weather.

Tornadic waterspouts generally begin as true tornadoes over land in association with a thunderstorm, and then move out over the water. They can be large and are capable of considerable destruction. Fair weather waterspouts, on the other hand, form only over open water. They develop at the surface of the water and climb skyward in association with warm water temperatures and high humidity in the lowest several thousand feet of the atmosphere. They are usually small, relatively brief, and less dangerous. The fair weather variety of waterspout is much more common than the tornadic.

He says that waterspouts occur most frequently in northern Michigan during the months of August, September, and October, when the waters of the Great Lakes are at their warmest and cold air moves in. If a spout develops, you can expect it to move at 10 to 15 knots (11-17 MPH) and last from two to twenty minutes. How about the 5 stages of waterspout formation from Dr Golden? Why not:

Click through for more including how the NWS forecasts tornados and also see this Michigan in Pictures post from 2008 with some more Great Lakes Waterspouts.

More weather on Michigan in Pictures.

photo credit: Waterspout moves across the Manitou Passage by farlane