The South Fox Lighthouse Association maintains this light, has lots of great history and photos and is a worthy target for your donations. Click the “f” to the left to visit them on Facebook. 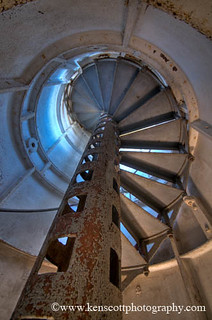 Recently, I made the acquaintance of Terry Pepper. Terry’s Seeing the Light is hands-down the best Great Lakes Lighthouse website out there and I’ve used him as a resource for years in dozens of lighthouse features on Michigan in Pictures. Terry told me I could lean on him (even more) for photos and information. It seems a shame to waste that gift, so here goes. On his South Fox Island Lighthouse page he begins:

South Fox Island is located approximately seventeen miles off Cat’s Head Point, at the tip of the Leelanau Peninsula. The story of this Island light began with Congress’s appropriation of $18,000 for the construction of a lighthouse there on March 2, 1867.

Work on the light station began immediately, with the construction of the Cream City brick tower. With walls thirteen inches in thickness, the square tower topped-out at forty-five feet in height, and contained a forty-eight step cast iron spiral staircase leading to the lantern room.

The lantern was outfitted with a flashing red Fourth Order Fresnel lens, and the station’s first keeper Henry J. Roe climbed the tower steps to exhibit the light for the first time on November 1, 1867.

Read on for much more including Keeper Warner’s battle with drifting sands and snow that piled so high as to interfere with access to the station’s buildings and more about that Cream City brick from Milwaukee.

OK, now who’s up for a little stroll around South Fox Lighthouse?

March is the new May