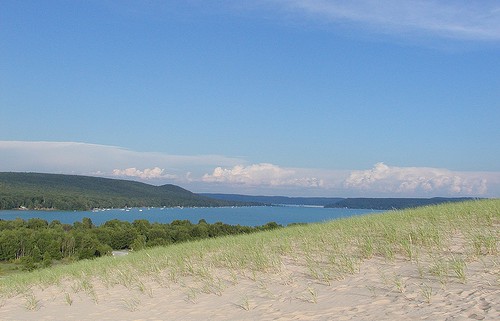 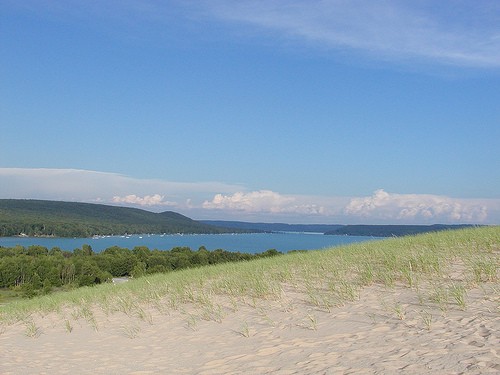 Glen Arbor is located on a small strip of land between Glen Lake and Lake Michigan, which is located in the middle of the Sleeping Bear Dunes National Lakeshore. Glen Lake’s natural beauty attracts visitors throughout the summer. Considered one of the most beautiful lakes in the entire state, local legend says that Glen Lake was recognized as “the most beautiful lake in the world” by National Geographic Magazine. National Geographic denies ever having published such a ranking.

Glen Arbor was first settled around 1848 when John LaRue moved from South Manitou Island in order to set up a trading post on the Sleeping Bear Bay. As other families moved into the area a wooding station was built to provide fuel for passing steamers. In 1856 a dock was built to aid in the loading of the steamers, which soon became known as the Central Dock. By 1868 the township of Glen Arbor had 200 people, three docks, two hotels, four stores, a blacksmith shop, and a copper shop. The Empire and Southeastern Railroad stopped in Empire just a few miles away, providing transportation to the area. It is said that before the 1900s there were numerous cranberry bogs along the banks of the Crystal River. The Crystal River runs from Little Fisher Lake to Lake Michigan. Signs of the old cranberry bogs can still be seen along the banks of the river.

Kayaks or canoes are available to rent from Crystal River Outfitters. They will drop you at the beginning of the river and it will carry you back to their storefront. If you are feeling really adventurous, either paddle around Glen Lake, or begin your expedition in Big Glen Lake, paddle through Big Fisher, then Little Fisher, then follow the Crystal River all the way to Lake Michigan. The famous Dune Climb is just minutes away from Glen Arbor, and there you can climb up the 150 foot dune. If a less crowded hike is more to your liking then head on over to Glen Haven for the Sleeping Bear Point Trail. The Glen Arbor area has years and years of history and reenactors can be found at the village of Glen Haven, which has been renovated to look like the town did in the 1920s. The historic Sleeping Bear Point Lifesaving Station, which was built in 1901, can be found just minutes from Glen Haven. For local news make sure to pick up a free copy of the Glen Arbor Sun.